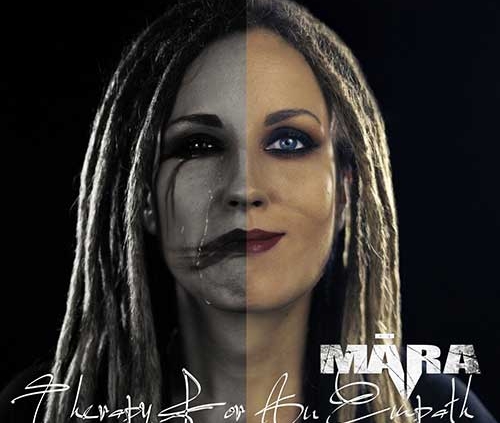 Latvian death/thrash/groove metal band MĀRA released their debut EP on November 2018. It’s titled “Therapy For An Empath” and consists of 5 original compositions: “Label Me Insane”, “Existential Survival”, “Blameshifter”, “Sell Your Soul” and “Be-long Now-here”. Brutal yet melodic, this album can appeal to extreme metal as well as melodic metal audiences.

This album will suck you in, you will lose the track of time and won’t even notice when it’s finished.
It’s very fast-paced, dynamic, versatile, at the same time catchy, well-executed and delivered with brutal love! We don’t want you to listen to it, we want you to feel it! That was the main goal for creating this album. Lyrical concepts vary between fierce anger outbursts to empowerment. You will want to put this album on repeat, that’s our promise”, MĀRA’s members are truly passionate about the album that they have created.

MĀRA is a relatively new name in metal world, but they are taking over it one hardcore fan at the time. In just one year of band’s existence they have already released 3 music videos from “Therapy For An Empath” EP tracks: “Label Me Insane”, “Blameshifter” and “Sell Your Soul”, they have played tours and summer festivals in Europe (Italy, Belgium, Switzerland, United Kingdom, Germany, France, Latvia), supported famous metal acts like Sepultura, Krisiun, Satyricon, Bloodywood and won 2 nominations in Latvian Metal Music Awards 2018 (Album Of The Year “Therapy For An Empath” and Best vocalist- Mara Lisenko).

At the moment MĀRA has started their work on their full length album which will be available in early 2020. At the same time playing as many shows as possible throughout all Europe.