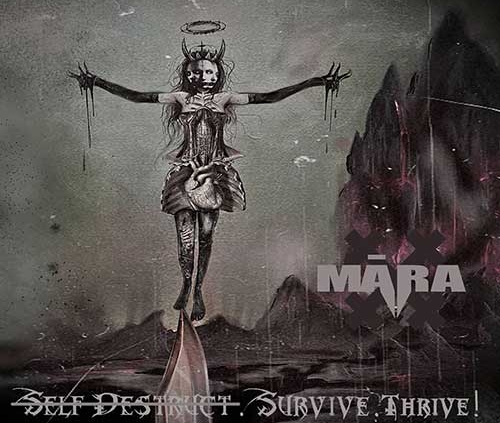 After the 2018 debut and masterpiece „Therapy For An Empath“, Latvian death/thrash/groove metal band MĀRA release their second EP titled “Self-Destruct. Survive. Thrive!” on 13th May 2020.

Despite deliberately disharmonic elements, many breaks and hasty speed, in the end, each song is undeniably catchy each in its own fashion.
The marginal use of synthesizer sounds refer strongly the industrial genre while then again they’re not shy to integrate the finesse of jazz elements to bind it with grooviest bass lines, and seal the knot with heavily shredding guitars.

The EP contains a very shamanic and traditional Latvian intro and four brand new songs plus the smashing “Life Kills (Fear)”, already pre-released in late 2019 on video.
All songs have a true and self-experienced storyline, feel invited to find out more on yourself!

“Beauty Of Humanity” features Björn Strid of Soilwork as a guest vocalist and indeed, he seems to be pushed to his limits by Māra Lisenko who takes over the brutal part of the duet. Certainly not a song for the faint-hearted though the chorus delivers optimism in a storm of rage and chaos.

“Religionipulation” is self-promising “nomen est omen”. Neck breaking speed, straight guitars, overwhelming bass lines, and machine-gun-like drums underlined by her growling vocals and Māra’s unique clean chorus style. Gut stirring like a parasite winding ever deeper into your body and the more the parasite seems to rule over body functions. Well, that is what religion is all about.

“Life Kills (Fear)”, a rough but catchy song with an unexpected, nevertheless atmospheric and thoughtful bridge. Who has already watched the video, knows the message of the song, yes, life kills and you might fear it, but everybody who still gets up will overcome it and become a winner, no matter how often you’re knocked down by life.

“Don’t Look Back In Grief” features Jeff Hughell of Six Feet Under as an additional bass player. This song is not a duel or a duet but a full force weapon cutting through your flesh and bones. No limitation as long as you don’t look back in grief is it both, exhausting and eye-opening.
It can be both, a fairy tale about knights and sirens, or about living now instead of being stuck in the worries of yesterday, or there is something else behind, find out and decide yourself.

MĀRA is a death/thrash/groove metal band from Latvia.
The band was established in 2018 and has already played tours and summer metal festivals all across Europe- Italy, Belgium, Switzerland, United Kingdom, Germany, France, Latvia, and supported famous metal acts like Sepultura, Krisiun, Satyricon, Bloodywood.

So far the band has released 4 music videos “Sell Your Soul”, “Label Me Insane”, “Blameshifter” and “Life Kills (Fear)” and two EPs “Therapy For An Empath” and „Self-Destruct. Survive. Thrive!“. MĀRA has also won 2 nominations at the Latvian Metal Music Awards 2018 for “Album Of The Year” (Therapy For An Empath) and “Best Vocalist” (Māra Lisenko).
The band has been rated #1 for ‘Brutal Female Fronted Metal’ and has scored in the TOP 6 best EP releases of 2018 and vocalist Māra Lisenko has topped many “Best Female Metal Vocalists” polls.